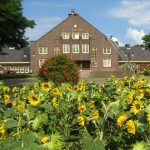 The Zonneplein (Sun Square) is the heart of the garden village of Oostzaan. The city of Amsterdam built garden villages in the interbellum to counterpoise the impoverished neighbourhoods in the centre. Garden village Oostzaan was built in the style of the Amsterdam School. Buildings of the Amsterdam School are characterized by brick construction with complicated masonry with a rounded or organic appearance, relatively traditional massing, and the integration of an elaborate scheme of building elements inside and out: decorative masonry, art glass, wrought ironwork, spires or “ladder” windows (with horizontal bars), and integrated architectural sculpture. In 1960 the neighbourhood was submerged by almost two meters of water after a dike burst.
The shops surrounding the Zonneplein have struggled with vacancy for the past few years. The shop owners of the area are trying to revive the neighbourhood. A couple of times each year they organise the Amsterdam Village Market, never failing to invite street orchestras. 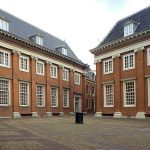 The Amsterdam Museum is situated between the Kalverstraat and the Nieuwezijds Voorburgwal. The history of this place goes back to the Middle Ages, when the Saint Lucien’s Monastery was located here: a women’s monastery with its own beer brewery and livestock. The Museum Café is situated in the former cow shed of the Monastery.
In 1578 the City Orphanage was built and it remained here until 1960. Hundreds of orphans received accommodation and education here. On the boys courtyard you can still see the cabinets in which the orphans kept their belongings. In the girls courtyard there are often concerts: on September 16 by street orchestras.

This is where, the Paleis voor Volksvlijt (The Palace of the People) was established in the 19th century: a large exhibition building, which mainly consisted of glass, inspired by the Crystal Palace in London. The palace was destroyed by fire in 1929. Only the gallery survived for a period, and it was used by Circus Elleboog, a children’s circus. The gallery was demolished in 1960, when the head office of De Nederlandsche Bank (the Bank of the Netherlands) was established here. The building was later expanded with the round tower. The buildings were given nicknames like matchbox and lighter. There used to be a bandstand on the square. A foundation organises concerts again in the Amsterdam bandstands, also in places where they no longer exist. Toeters & Bellen have played here a couple of times before.

Café Noorderlicht (Northern Lights) is situated on the NDSM-area, a former shipyard. Sea-vessels were built here between 1915 and 1984. After bankruptcy, the buildings were squatted in. They became an important artistic breeding ground, with affordable housing and workshops for artists, craftsmen and supporting companies. Each year this is the area where the festival ‘over het IJ’ (‘across the IJ’) is held, with lots of site-specific theatre. The IJ is the name of the river separating the centre of Amsterdam from the North of Amsterdam. Café Noorderlicht is built sustainable, in a re-used warehouse, isolated with straw bales. 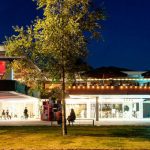 The tollhouse: a place where you had to pay a toll to leave Amsterdam heading North via the boat-canal. It had a garden, which grew out to be a garden of delights in the 19th century: a place where wealthy citizens enjoyed fresh air and concerts. The current building, dating from the 60’s, was the company restaurant of the Shell Laboratory. De hall is now exploited by Paradiso, a famous music temple (in a former church) close to the Leidseplein in the centre of Amsterdam. Referring to its location in Amsterdam, this northern concert hall is called Paradiso Noord (North). This is the venue for the T&B Jubilee party on Saturday!. 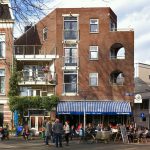 Bar-restaurant ’t Blaauwhooft is located on Bickers Island, an artificial island originally from the 17th century. The island was named after the Bickers, a wealthy merchant family. The island knew a buzz of industrial activities with its warehouses, small shipyards and companies, related to maritime/shipping trades. At the city side of the island, under the arches of the railway bridge, small business spaces called ‘Onder de Bogen’ (under the arches) are situated. The Hendrik Jonker Square is named after the family Jonker, who owned a factory for mechanical tools. The name ‘t Blaauwhooft’ refers to the bastion of city walls in this area.

The artificial island Kattenburg was filled in the second half of the 17th century. The main building, the land store of the Amsterdam Admiralty, now accommodates the National Maritime Museum. In the early days of Kattenburg, most of its inhabitants worked in the shipbuilding industry. They were called ‘little Axes’, referring to the main tool used for constructing wooden ships. Kattenburg was rather downgraded after the second World War. In the sixties, the area was completely renovated. For this purpose, the original house fronts were refurbished and new buildings were created behind. 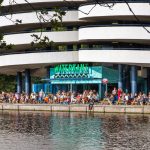 The Surinam bar-restaurant De Waterkant is located at the ground level of a characteristic multi-storey car park at the Marnixstreet. This car park was designed in the late sixties, by the architect Piet Zandstra. The sentiments about the building were divers, ranging from ‘ugly as hell’ to unconditioned admiration for this piece of architecture. Soon, it was nicknamed ‘the buttocks of Zandstra’. In 2007, two thousand people posed naked in the car park, to participate in the large scale nude shoot of the photographer Spencer Tunick.

Bar & Restaurant Kanis en Meiland is located at one of the Eastern Docklands, called KNSM Island. Between 1856 and 1981, the KNSM (abbreviation of Royal Dutch Steamboat Shipping Company) owned docks and a harbour, responsible for recruiting passengers and cargo heading to, among others, America and Indonesia. When the KNSM left in 1977, the island was taken over by squatters, artists and urban nomads. Since the nineties, new buildings have been constructed to become a highly popular residential area for modern city dwellers.